What’s a modern day mountain bike without a groupset? Well, it’s a frame, suspension fork, wheels and control items, but it’s not a bike, it's nothing more than a fancy scooter. Thought of as the bike’s engine room, the drivetrain consists of the cranks, chainring/s (front cogs), chain, cassette (rear cogs), derailleurs and shifters. Simply put, it's a closed circuit that propels the bike forwards.

In this article, you’ll learn what you need to know when it comes to mountain bike groupsets including what each part does, the critical difference between various price points and other information you’ll need to make an educated decision on which groupset is best for you.

Components of a groupset

The crankset is what the bicycle pedals attach to and are what your legs spin in circles as you pedal. On modern mountain bikes, the crankset consists of the crank arms, chainrings (the front cogs) and the axle that connects the two crank arms.

The crankset and its number of chainrings dictate how many forward gears a bike has. Modern mountain bikes have one, two or three, with the latest trend being the fewer, the better.

The length of crank arms does vary, but not as much as seen with road bikes. Crank length in mountain biking is typically more standard to help with leverage at an average lower riding speed. With this, smaller bikes will often use 170mm crank arms, with medium-sized bikes and up using a 175mm crank length. Downhill bikes and similar will use shorter 165mm cranks for improved ground clearance.

The cassette is the rear cogs that connect to the rear wheel. These rear cogs dictate how many gears a bike has at the back, with most modern mountain bikes typically offering between eight to twelve gears.

The chain is what connects the front crankset to the rear cassette. Without the chain, the bike has no drive. A chain is usually made of steel and features a series of interconnected links that rotate smoothly but are difficult to twist laterally.

Deraillerus are the components that guide the chain between the cogs. These usually work by having a cable, or hydraulic fluid pull them in one direction and then relying on spring tension within the derailleur to pull opposite direction.

With the rear derailleur made of a series of springs, rough terrain in mountain biking can see this component slap around, often leading to lots of noise and the potential of a dropped chain. In recent years "clutch" equipped rear derailleurs have become the standard for intermediate and better mountain bike derailleurs. This clutch creates a one direction friction in the cage that the chain runs through, and offers a quieter ride with a significantly reduced chance of a dropped chain.

New electronic technology sees small servo motors added to some derailleurs, which control the movement; this is known as electronic shifting. Such technology comes at a premium price but removes the risk of mud, water or general wear affecting shift performance. This is because a cable-operated (mechanical) system relies on precise cable tension and cable condition to accurately move the derailleur between gears.

Sitting at the handlebars within easy reach, the shifters are your controls for enacting a gear change. The shifters are linked directly to the derailleurs, typically by way of mechanic cable.

The most common type of shifter on a mountain bike is the ‘trigger’ shifter. Here, either your thumb or forefinger is used to actuate a shift. A less common design is that of grip shift, which works by twisting the grip to make a shift. Each brand offers a different style of shifting; we’ll explain this later. Traditionally part of a groupset, mountain bike brakes have broken free into their own category in recent years. In many cases, you’ll still be able to match your brakes to your desired groupset, but it’s far more common to mix-and-match in this regard. This is due to disc brakes becoming the standard choice in mountain bikes. Where over a decade ago rim brakes were still popular, disc brakes now are featured on just about any mountain bike selling for over RM2000.

Disc brakes are easily segmented into two categories: Hydraulic and mechanical. Hydraulic borrows its technology from the automotive world and uses a fluid system to transfer force from the brake lever to the brake pads. Being a sealed system, it’s incredibly low maintenance and easy to operate.

Mechanical disc brakes remain the standard choice for lower-end mountain bikes where the hydraulic systems are too expensive. Here, a wire cable is used to transfer the force at the brake lever to the brake pads. This system is not sealed and is susceptible to dirt, rust, cable stretch and other wear factors. As the brake pads wear, a simple manual adjustment will be needed; whereas with hydraulic systems, such modifications are generally automated. 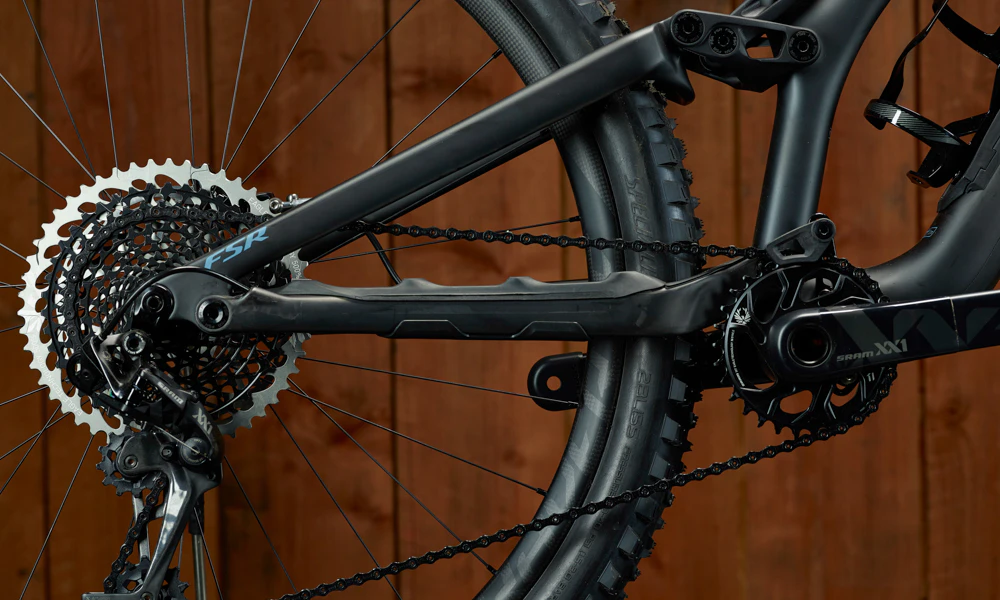 Much like the engine and transmission found in a car, bicycle gears are used to allow your motor (legs) to cover a range of speeds and gradients efficiently. Here, different gear ratios change how far the rear wheel spins in relation to crank at the front. Easier (lower) gears result in a rear wheel that turns less with regard to the crank, while harder (higher) gears will see the rear wheel travel further for a single revolution of the crank.

Mountain biking often involves low gearing to scale steep hills and overcome loose terrain. Due to this, mountain bikes use specific gear ratios that are best suited to the rugged terrain, and generally lower average speeds compared to other cycling forms. Bigger wheel diameters effectively make the gearing harder, and so as mountain bike wheels have increased in size, the gearing has become relatively more comfortable.

The critical thing to know is that the available gear range and number of gears are not the same thing. The gear range refers to the span from the very hardest (high) to the easiest (low) gear. A bike with only 11 gears can potentially have the same high and low span as a bike with 30 gears. 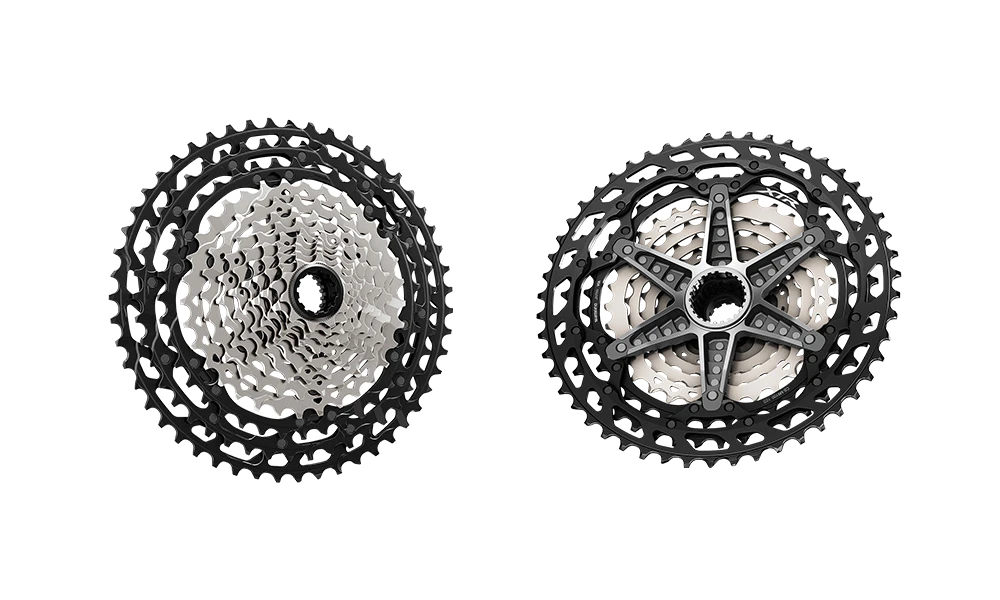 Understanding gear range is becoming increasingly important in mountain biking as it’s how and why many modern bikes are moving away from three chainrings on the front, and moving to two or even just one. This new approach comes from new cassettes that offer a significantly increased range.

There are multiple reasons to have fewer front gears on a mountain bike, but the main reasons include greater simplicity, more effortless operation and improved reliability. Additionally, where two or three chainrings are involved, there are always going to be overlapping/redundant gears, so for example, a 27-speed drivetrain may only offer 18 truly different ratios. Reducing the number of chainrings reduces this overlap.

The number of teeth on the individual chainrings and rear cogs calculate the exact gear ratios of a bike. The smaller (fewer teeth) a chainring has, the lower the gear is. Out back, it’s reverse of this, and the lowest gear will be biggest (with the most teeth) cassette cog.

Reverse this, and you have the highest gear. This is the most prominent front chainring matched with the smallest rear cog.

It can be confusing to get your head around, but generally speaking, chainrings are smaller, and cassettes are bigger on mountain bikes when compared to other popular bike types.

There are two key groupset brands in mountain biking that control a large share of the market – Shimano and SRAM. Below we outline the hierarchy available for each brand. The market leader in all cycling categories, Shimano has the biggest range of mountain-specific groupsets.

Most of Shimano's groupsets are designed to work together (as long as they share the same number of gears), making it possible to mix componentry, although for optimal performance it's best to keep uniformity.

Shimano’s mountain bike shifters use ‘Rapid Fire’ technology, where your thumb operates one shift lever to move the derailleur in one direction, and your forefinger works the other to send the derailleur the opposite direction. From Alivio-level and up, that forefinger lever can also be operated with your thumb. Rapid Fire allows multiple gearshifts to be made with the large thumb lever and on more expensive models, both levers can shift multiple gears in a single push.

Below is a brief breakdown of Shimano's mountain bike groupsets. 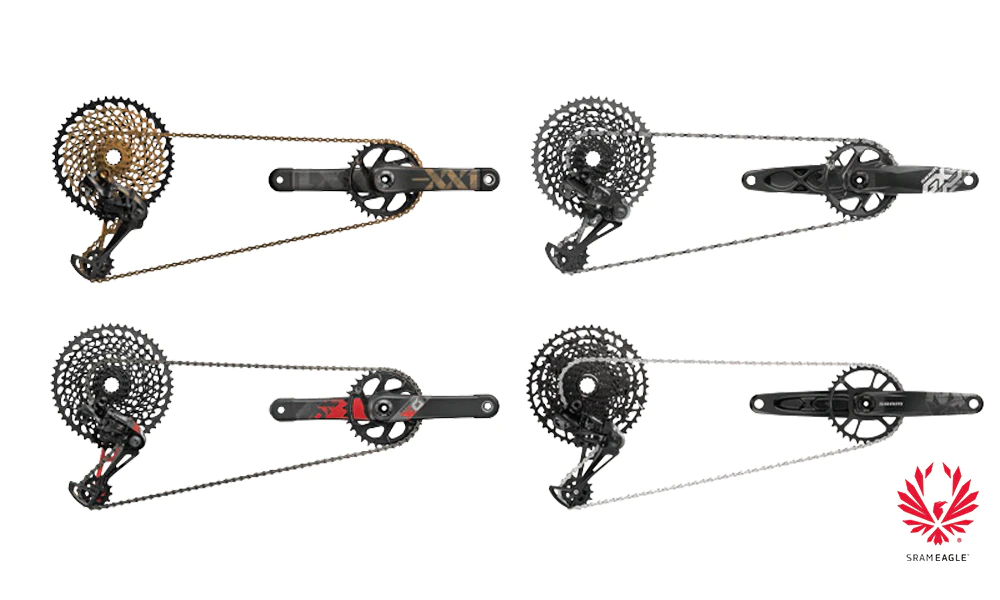 SRAM has multiple mountain bike groupsets available, and in many ways is the more progressive company in the mountain bike sector with having first introduced 2x and then 1x drivetrains to the mainstream mountain bike world.

SRAM’s groupsets are not as clearly defined as Shimano’s and so mixing, and matching of components is typical at the lower end. SRAM is fast moving toward 1x-specific drivetrains on nearly all of its intermediate to premium groupset options. Assuming the number of gears match, SRAM parts are typically interchangeable between series.

Shifting with SRAM comes in two styles – trigger shifter or grip shift. Grip shift, which works by twisting the handlebar grip to shift is where SRAM started but isn’t as popular these days and isn’t found stock on new bikes – although it’s readily available as an aftermarket option. Trigger shifting is now the standard choice for SRAM users and works similar to Shimano’s Rapid Fire system, but your thumb operates both levers with a push. It was SRAM’s system that prompted Shimano to add the option of thumb operation on its more expensive shifters. Such a design allows shifting in both directions and brake control at the same time.

Below is a basic breakdown of SRAM's groupsets. Mentioned below are the models you’re likely to find on 2018 model bikes.